How feminists have burned their own bra 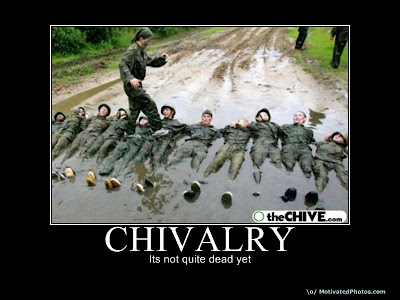 I've been conducting an experiment on my morning bus commute to work over the past few weeks.

You see, I get on the bus quite early when there are always spare seats.  Around four stops later, the bus is packed to the rafters; standing room only.

As the bus fills up and all the seats are taken, I start monitoring the people who get on the bus with the same intensity of an Eagle scanning for some prey in the desert.  As soon as a female boards the bus and has nowhere to sit, I’ll offer my seat to them.

Yes, it’s an attempt to be chivalrous and, well, it’s just a nice thing to do.  The problem is, it hasn’t gone so well – as of Wednesday this week my seating offer had been rebuffed 14 times in a row.

In fact, the incredulity with which my seating offers are met would leave the writer of "I am woman hear me roar" cowering in the corner.

It led me to ask the following question: why are women these days so reluctant to accept a guy doing something nice for them?

For example, according to feminist blog, Madame Noire, “Chivalrous behaviour is no longer the norm, because it is not required. Gone are the days when women expected men to open, hold and close doors for them. Many would rather do it themselves to demonstrate their ‘independence.’”

I actually reckon it goes a bit further than that.  There was a case recently where an intern at the Herald Sun newspaper wrote a scathing article about her experience at the newspaper.  One of her chief criticisms was the following:

“Men were also continuously and unnecessarily sexist, waiting for me to walk through doors and leave the elevator before them.”

What the…?  So, it seems doing nice things for the opposite sex, in some women’s minds, is not nice, it’s actually sexist?

Maybe it’s as Dave Chappelle says, “Chivalry is dead… and women killed it.”

It seems that long gone are the days when opening doors for women, carrying heavy luggage for them or offering your bus seat to them was considered charming.  Now, women take it as a sign that you reckon they are inferior to you and are implying they can’t survive without a little help.

If you offer them a seat, they’re thinking “You don’t think I’m capable of standing up?”

You offer to carry something heavy and they’re thinking “You think I’m too weak to carry it myself?”

That’s because feminists have been saying for years that women can and should do everything men do and anyone who challenges this is a misogynist, a chauvinist, a pig and possibly plays Rugby League.

The other option is that women are distinctly mistrustful of men and assume that if a man does something chivalrous, it’s clearly a deep, dark ploy to try and get them into bed.  Again, Rugby League players have not helped dispel this myth.

However, enough is enough.

Ladies, please, accept the fact that some guys might just want to be nice.   And because they’re being nice, just accept their damn niceness!

What do the women out there think, though?  Is chivalry really dead?  Is it offensive if men do nice things for you?  Or do you think chivalrous guys are being a) offensive and sexist, or b) trying to get you into bed?

All I know is that I’ll keep offering my bus seats.  And if past experience is anything to go by, I’ll enjoy a comfy-seated ride all the way to work regardless.
Email Post
Labels: Annoying Controversy Ethics Feminism

Unknown said…
it's a win-win for you really. you get to do the nice thing and offer your seat, but still get to enjoy its comfort. nice one!

seriously though, while i'd appreciate the offer, i probably wouldn't take the offer up, but not for either of the reasons you mentioned. simply because it's not necessary.

i do think it is more towards option a) though - the implication that women are the weaker sex and need to sit down more.
24 August 2012 at 09:07

kerryn said…
I am leaning towards B. I would love to think that there are guys out there who are just being generous but history has taught me that more times than not there is an ulterior motive. It is sad that the genuine guys have to suffer for the motives of others but as women, more and more we live in a world where we are taught to be on guard and to protect ourselves. That builds an inherent distrust of men who perform unusual actions with no logical reason behind them.
I am currently in a country where this is demonstrated to the max. I have been approached time after time here as I am seen as the rich westerner and it would seem that guys see us as opportunity. It is horrible and ends up making you quite distrustful and overly cautious.
So I think it's great that u continue your quest of noble chivalry and wish u the best of luck. At worst you may restore the trust of some girls who dare to take up the offer and find you ask nothing in return.
24 August 2012 at 09:20

Ingrid said…
I often offer my seat to older people and get rebuffed, "I'm not 'that' old yet" I want to teach my children to be thinking of others, but it's hard when no one helps teach the lesson. I also remember being very pregnant and aching for a seat that was never ... I think seeing an opportunity to do something nice needs to be practised otherwise people just won't even see a need. I think as a society we need to serve others more and be less afraid of letting others serve us, even if we don't desperately need it, it's good for the server too.
24 August 2012 at 09:45

ahunter said…
Good on you DM. I for one will be raising my boys to be chivalrous (sp?). I think it's right teaching to train them in looking after women - either strangers, family or friends. If a woman is in trouble I would want my boys to help her. I might be old fashioned but I just think it's the right way.
Chivalry is not dead but it's not for the faint hearted!
24 August 2012 at 09:46

Chris said…
Chivalry is for ladies. But, feminists want and should get equality, treated equal to men. Open their own doors, pay for their own meals, fix their own flats, carry their own 75 pound luggage, put their own bags into the overhead compartment, etc.

I have no problem offering feminists equality and reserving chivalry for ladies.
28 August 2012 at 09:38